The Fascinating History of Swimming Goggles!

We’ve been developing goggles at Zoggs for more than twenty years and although we’ve been a pioneer of eyewear for swimmers and introduced a number of world firsts, we didn't actually invent goggles. Believe it or not, they've been around in one form or another for hundreds of years! 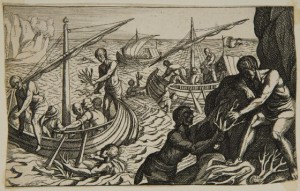 Here's a brief look at the fascinating history of goggles:

14th Century:
The oldest record of anything goggle-like being used was by the ancient Persians who used tortoiseshell to cover their eyes while diving for valuable pearls.

16th Century:
The word only came into use in English in the 1530’s as ‘gogolen’, meaning ‘to roll the eyes about.’

18th Century:
Free divers of the Polynesian Islands were the first to use glass in eyewear, trapping a layer of air in their goggles to improve visibility underwater. 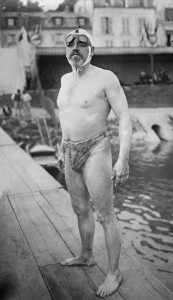 20th Century:
This is where the life of the comfortable, functional and popular goggles that we know and love today really began…

1911:
Thomas Burgess became, on his 14th attempt, the second person ever to swim across the English Channel, but he was the very first person to do so using helpful yet leaky motorcycle goggles.

1926:
Following in the footsteps (or should we say swim strokes?!) of Thomas Burgess, competitive American swimmer Gertrude Ederle became the first woman to swim cross the English Channel. Although she used a similar style goggle to Burgess, she improved on the design and made hers waterproof by using a paraffin seal.

1936:
Another patent was submitted, this time by fellow American inventor Walter Farrell, who listed goggle designs that were specifically intended for underwater eye protection.

1940s:
Readers of the popular Science Magazine were given instructions for making their own wooden swimming goggles! 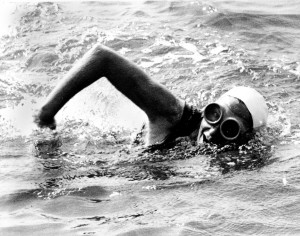 Florence Chadwick is shown four miles off the Dover shore during her record-breaking swim across the English Channel, England, on Aug. 8, 1950.

1950s:
Florence Chadwick, a competitive open water swimmer was one of many to use large, double lens rubber goggles to improve visibility and protect her eyes from salt water, but she was the first to swim the Channel with them in both directions and set new time records for each trip.

1960s:
Brave miners required to swim used their ingenuity to create their own unique style of goggles that included plastic cups which were secured with elastic straps.

1968:
Despite being around in one form or another for centuries, it wasn’t until the swinging, swimming 60’s that the first commercial ad for goggles was placed in Slimming World Magazine. Promoted as swimming aids for training, these early, rather uncomfortable goggles were only available in one size and were prohibited from use in competitions.

Zoggs brand launched in Australia in 1992

1970:
British competitive swimmer, David Wilkie, became the very first person to use a swim cap and goggles in an international competition at the 1970 commonwealth games. He wore them to enhance visibility and protect his eyes from the chlorine and achieved a new personal best and a bronze medal!

1992:
The Zoggs company was launched in Australia with the very first range of goggles offering UV protection to swimmers.

1994:
Building on the creative efforts of all those who went before them, the developers at Zoggs launched the Phantom goggle, the world's very first patented one piece goggle.

1995:
Just one year later we launched our Little Ripper goggles which went on to become the No.1 selling junior swimming goggle in Australia and the UK.

1996:
Zoggs’ U2 goggles were launched, giving swimmers all the benefits of the one-piece Phantom with the added, extra glare protection of mirrored lenses.

1997:
Our Saibo goggles were launched which, featuring a pearlescent, flexible, soft-frame goggle were another world’s first!

1998:
In this year, we launched our Clearer Vision goggles which enhance vision indoors or outside by providing clarity and brightness in the pool and reducing glare in sunlight.

2001:
We never stop striving to enhance eyewear for swimmers and in 2001, we launched our Super Seal goggle range, the very first to feature a 100% silicone flexible fit frame for improved comfort and performance.

2003:
Kids love swimming and in this year, Zoggs launched the colourful Junior Kids goggles range for children up to the age of 6 and it was – you guessed it – another world’s first! 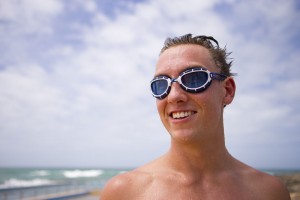 2006:
To enjoy the best performance from your goggles, you need straps that support the right fit and that’s why Zoggs introduced the advanced Push-pad and Ratchet Quick-fit strap systems.

2008:
To maximise fit and comfort for any kind of recreational or competitive swim, we launched our hypo-allergenic Soft-Seal gaskets which cleverly mould to the unique contours of each individual swimmers’ face.

2010:
Polarized lenses which reduce glare but amplify light in overcast or dark conditions were offered for the very first time as an option on the Predator Flex goggle.

2011:
Comfort after a swim is just as important as comfort in the water. For that reason, Zoggs introduced Air Cushion Technology, offering swimmers a choice of goggles that maximised comfort and reduced those tell-tale, post-swim panda eyes!

2013:
This was a particularly busy year with the launch of two new goggle options; the Predator Flex Reactor goggles were the world’s first to feature photochromatic lenses which automatically adjust to the amount of available light, while the Sea Demon became the first goggles in the UK to offer a fun, hologram lens.

2015:
At Zoggs we never stop innovating and this year, we launched the revolutionary Predator Flex Titanium Reactor Goggle and Little Sonic Air, the first air cushion goggle for 0-6yrs.

2016
How will Zoggs be shaping the history of goggles next year? You’ll have to wait and see.....

In the meantime, explore the extensive Zoggs goggle range available, find a pair that suit your swimming needs and style preferences and simply order online.